I spotted it in the corner of the carriage maker’s shop.  It was big, I mean really big, a 36 inch band saw.  For some strange reason I have always wanted a large band saw to re-saw and stack cut pieces and here it was.   After a short negotiation, my friend Harley Chandler sold me the saw.  See more about Harley and his work at (www.Oldfashionedfarm.com).  It took seven men to load it.  A heavy casting with a high center of gravity made for a difficult load.

When my wife Sharon and I got home, it was only the two of us to unload.  What a job.  It was more of a controlled fall.  We hooked several cargo straps to the side boards and slowly ratcheted the saw down the ramp.  When it struck terra firma we were relieved.  After that we used pipes to roll it into position.  There it sat for several years, collecting dust from my shop.

The saw is made by J.T. Towsely Mfg. Co. of Cincinnati, Ohio.  The saw was likely made in the 1920’s. A catalog found on the www.vinagemachinery.org site lists the weight of the saw at 1275 pounds.

This winter I got serious about re-storing it to service.  The first step was to construct a motor mount.  My friend Don had a metal base from an old conveyer motor and we used it with several hinges.  This worked really great.

Next came mounting new band saw tyres.  A call to Woodworkers’ Tool Works (www.woodworkstoolsworks.com) supply in Wisconsin fixed me up with the tyres.  A set of old instructions from Robert Vahn from a previous band saw restoration saved the day.  Putting these large tires on can be daunting.  On this machine I used a special epoxy for the job.  The epoxy does not harden like the type used for normal repair work. It remains soft and pliable.  In the past I have used Indian head shellac with good results.   A short length of ½ inch black pipe is used to lift the tyre from the wheel, then a thin coating of epoxy is applied.  I emphasize small amount, on the first tire the epoxy oozed out for a long time and was a mess to clean up.

With the tyres on, it was time to make the guards for the wheels and belt.  The wheel guards were already started when I purchased the machine.  This was very helpful.  I finished them and like how they turned out.

The saw works great.  No, I’m not going to saw the CEO Creamcicle; he just likes the view.  Typical uses for the saw so far have included sawing short lengths of 12 inch thick black walnut logs, resawing white oak stave blanks for barrels and resawing white cedar for wooden pails.  I’m very happy with the performance of the saw. 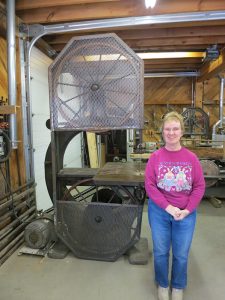 If you would like to see what I’m offering in my online shop for purchase, click here.